Steve has worked in the building directly across the street from One World Trade Center for two years, but we’ve never been to his office. It’s not the place where one brings dirty children. A couple of weeks ago, we went anyway and checked out the whole area.

While I’ve been to the seaport and other downtown spots, this was the first time that I’ve been to the WTC since 9/11. Right after it happened, I couldn’t go down to help with the relief effort, because I was pregnant. Later, I had no interest in looking at the gaping hole in the ground and getting depressed. I was a little horrified at what that area has become. Two blocks of death.

The footprint of the old buildings are now water features that stretch out for two blocks. And there’s a museum that’s sloped like it’s midway through collapse. NO! Just to the side there’s the new transportation center that looks like the sunburnt bones of a mythical creature. There are vertibrae and ribs! And when you’re inside, the bones continue, so you feel like Jonah in the dead whale.

People died over there. A lot of people. Everybody else was scared shitless. And I want to forget about it.

But once you get past the two blocks of death, that area of the city is happy capitalism. Between 9/11 and Hurricane Sandy, downtown wasn’t looking too pretty for a long time. Now, it’s a big amusement park. There are building cranes everywhere. Steve’s building has a fancy-pants mall in the basement with Hermes and Louboutin stores, aka gift stores for guilty stockbrokers. There’s a cafe that stretches out along the water.

People want to live right next store to their offices, so half the buildings going up are residential. There’s a mile deep Whole Foods with perfect red apples.

I showed the kids where George Washington took his first oath of office. We went into Trinty Church. We said hello to the Stock Exchange. We had beers at a cool joint with views of the Statue of Liberty. 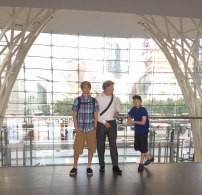 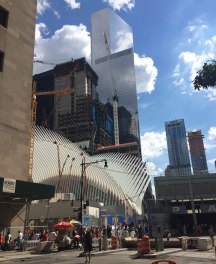 2 thoughts on “Death Monuments and Beers on the Water”