Last night, as we were driving back from an exercise class for special needs kids at the Y, I noticed that Ian looked very serious and was tugging on his hair.

“What’s up, Ian? Why do you look so serious? What’s the matter?”

“Concerneries? What’s that? Oh, you mean that you have concerns or worries. Okay, what are you worried about?”

“When is the world going to end?”

“Oh, not for a very long time. The scientists keep an eye on these sorts of things and they tell us that we’re safe.”

“Is North Korea going to nuke us?”

“No. Their bombs kind of suck. They blast off and then plop in the water.”

“Fake, you mean? No, they’re real, just not very good. And if they do get good at making bombs, then China, Russia, and the US will march in and take them away from them.”

“Are the terrorists going to invade?”

“No. There aren’t very many of them, and they’re mostly just crazy. They do random stuff instead. The CIA is keeping an eye on them and putting them all in jail.”

“Are the aliens going to invade?”

“No. There are no such things as aliens.”

“Yes there are. They in New Mexico.”

[Note to self: tell Steve to stop watching X Files with Ian.]

“Is Earth going to get hit by a meteor?”

No, because the scientists are keeping a very close on the skies with powerful telescopes, and they tell us that the coast is clear. And if one does get close, then they’ll shoot it with a nuclear weapon, so it explodes before it hits the earth.”

“You mean it will explode in the sky like fireworks on the Fourth of July? Hey, that rhymes!”

By then we had pulled in the driveway, and he was racing into the house to go back to editing his computer games. (What does that mean? I don’t know. He watched some videos on YouTube about it and he messes around with the code. It’s pretty cool.)

But the mixture of truth, white lies, and outright falsehoods that calmed Ian from his concerneries won’t work with me. Good thing there’s wine. 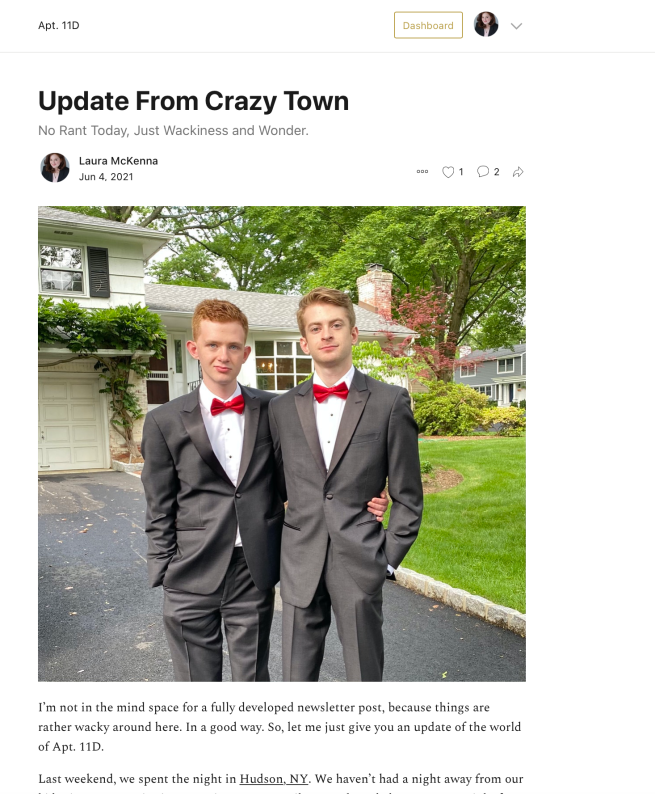 SHOP Apt. 11D Gift Guides
SHOP Apt. 11D Tips
(When you shop at Amazon, please use these links. When you buy anything, not just my recommendations, you help support this blog. Thank you!!)
One-Time
Monthly
Yearly

Or enter a custom amount