We finished moving Jonah into his off-campus house over the weekend. It was a month long process with many trips to IKEA and the mattress store. Because it’s a 6 Guys and 1 bathroom college house, I made the pediatrician give him every shot available for 19 year olds. I prepared his immunity system as if he was traveling to a third world nation with open sewer systems.

I think it’s the last time that I will set foot in that house, unless it’s time to collect him at the end of the year. The front shrubs were already decorated with Bud Light cans and cigarette butts. I am so not happy. I can’t remember how he was able to get me to give the okay on this plan.

Ian’s first day is lot less eventful. He’s been at the school quite a bit this month already for marching band. It’s his second year of marching band, which is super tough on him. The music part is easy. Tolerating other kids for a full day and lugging a heavy snare drum around a field in a polyester uniform is very, very hard. But he’s doing it.

We did a lot of different kinds of camps this summer, all of which were good in their own way, but the best was the computer programming camp. It was 9 to 5 computer programming. He did it without an aide. And he hit it out of the ball park. It was super expensive, but so, so worth it. We’ve bought Ian out of autism. I’ll write about that later. 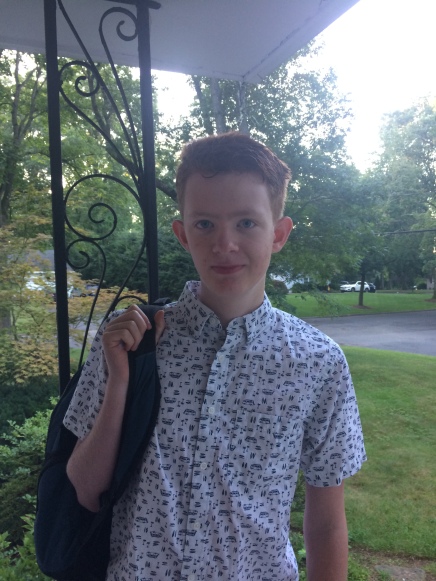 7 thoughts on “First Day of School”