We moved three months ago, and we're still not settled. While this house isn't in the desperate straights as the first house that we bought, it still needs lots of work. The previous owners last decorated their home in the early 80s, so the shrubbery is overgrown, the walls are covered in country wallpaper, and the light fixtures are dusty and dated.

When we moved in, Steve and I figured that we could do much of this work on our own. We like feeling self-sufficient. We also like saving money. So, even though the house is surrounded by towering oak trees, Steve spent his weekends raking leaves, rather than hiring a landscaper. I pulled out the old junk left in the basement and painted the walls with waterproof paint. I painted the living room. Steve changed out some old light fixtures. 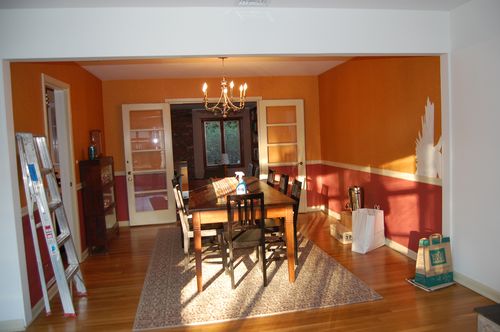 Last week, I started pulling down the orange starred wallpaper off the dining room walls. After three evenings, I stripped about three feet of paper. The stuff was stuck on with super glue. And under the wallpaper, I found bumpy walls. Someone had put primer over old wallpaper glue. The walls needed to be skim coated with plaster. Sigh. Skim coating is outside of my pay grade. I called in Eddie the painter.

So, Eddie and his guys are doing the dirty work for us. For four days, they've stripped and painted the dining room, the kitchen, the TV room, and the entrance way. This job would have taken us a year to do on our own, and it wouldn't have looked so good. I keep sneaking upstairs to take pictures of the before and after. (That purple in the dining room is primer. Today, they should paint the upper walls a light grey.) 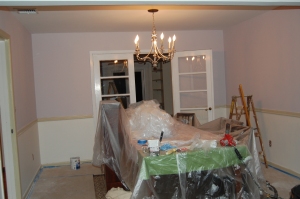 As happy as we are with their work, we still feel a little guilty. Yes, we're saving time. Time that can be used to play with the kids and pitch article stories. And we can afford this. But we still feel spoiled.

Down the block from us, a huge mansion is being built. Someone bought a house for $700,000 and then knocked it down to build a house the size of a small town. Every morning, twenty trucks are parked out in front to install the plumbing, granite counter tops, decorative woodwork, in-ground pool. They've been working six days a week, since we moved in at the end of August, and they are still not finished.

Painting four rooms is not in the same league as the mansion project, but living in such close proximity to extreme wealth is frightening. We're the people who used to live in a cockroach covered apartment with a four floor walkup. That year when I owned one pair of shoes. We're struggling to remain ourselves with our DIY projects amidst all this insanity.

Because of the weird turn of the market, we were able to buy a wallpapered house on a block filled with the 1%, and we're still not at peace with it. So, I find myself googling directions on how to remove polyurethane from slate floors without hiring a contractor.

17 thoughts on “DIY Fail and Guilt”