A guest post from my dear, geeky hubby, Steve…

Laura’s asked me to review a
couple of books for you folks; she tells me my last review snagged her thirty
bucks from Amazon. Did anyone
really purchase The Three Stooges box set? I hope so! Thanks
for shopping through 11D! Every dollar means one more smile from Laura, one more book for the library, and one
month shaved from the lifespan of the IKEA Billy bookshelf.

So here we go,
my reading list from the past few months. Hope you enjoy exotic locales, intrepid explorers, and the futility of
empire! 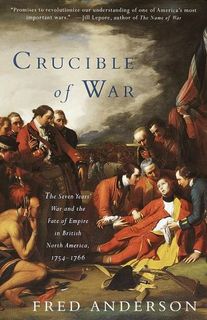 Anderson, Fred.
Crucible of War: The Seven Years' War and the Fate of Empire in British North America, 1754-1766

A real tour de
force; the hardcopy would make a keen doorstop. But that’s not to say this one isn’t worth a read. Chock full of goodness; parliamentary
politics, Indian diplomacy, and enough army stuff to satiate the hunger of the
most geeky of military historians.
This is the story of the first global war, a battle for survival between
the two greatest empires of the time, started and ended right here in eastern
North America. Unlike in past
battles between France and Britain, however, Britain went in for the kill, and
with her extraordinary success she laid the foundation for her own imperial
collapse. A fine piece of
history; well-written and well-researched. But be forewarned: it’s deep!

Bonus points: I bought this in the Fort
Ticonderoga bookstore. Very
appropriate! After finishing the book I put “Last of the Mohicans” into the Netflix
queue. Read the book to find out why!

Another fine
product from Professor Fischer. I
read this one while in Lake George, right before the Anderson book. The first battle between Champlain, his
Huron and Algonquin allies, and the frightful Iroquois? OMG, that was up the lake four hundred
years ago last Thursday! One of
the strengths of this book is the amount of time he spends discussing the
various Indian cultures of the era (and explaining why he uses the term
“Indian” rather than “Amerindian” or “Native American”). Why is it called the “French and Indian
War”? Champlain and his unique relationships
with the Indians helped set the stage for that conflict a century before.

This is a book
about leadership, although I don’t think Fischer intended it to be used as
such. It’s a story of optimism and
flexibility in the face of hardship, of the value of foresight and effective
planning, of perseverance and risk management. Champlain is an astonishing figure, very much of his time,
but in many ways farther ahead than his contemporaries. North America would be much different
if he had more support in France.

Bonus points: I suggested this book to a former
manager of mine, and native Quebecois. “I’m related to him, you know,” he said. His über-great grandfather, a cousin of Champlain, was
transported in the mid-seventeenth century from Marseilles to New France: he was caught diddling the mayor’s wife
and embezzling some cash. There he is (or more
likely an immediate ancestor) on page 23!

“Black Robe”,
into the queue. It’s hard for us
to imagine what North America looked like before the Europeans came in great
numbers. Who lived here? What was the environment like? How did people communicate? Travel? Trade? Sanderson paints (or pixilates?) the picture for us, and the results are
amazing. See Inwood, then
and now. Sure enough, that looks
just like Inwood, but without the Henry Hudson Bridge!

This is the
least historical of the books here, and at times I was at a loss. But that’s no excuse to pass this one
by. Sanderson is an ecologist by
trade, so there is lots of good old-fashioned science in here. But he does a good job explaining Muir
Webs and the impressive computing power necessary to map thousands of geologic,
geographic, meteorological, and hydrologic relationships and how those
relationships affected the flora, fauna, and people on the island of Manhattan
four hundred years ago last September, when Henry Hudson sailed the Half
Moon up the Hudson River. That’s some sentence, and this is some
book.

Cunliffe, Barry. The Extraordinary Voyage of Pytheas the Greek

, a ten thousand year excursion through
European history. Northern Europe
was also a New World, once upon a time, full of strange peoples and fantastic
landscapes. Extraordinary
Voyage is the story of a Greek from Massalia who travels through Gaul to
Britain to Iceland and back in the fourth century B.C. Did he really explore the edges of the
known world, or were his adventures fanciful legend? Most ancient scholars believed the latter, but Cunliffe
seems to think that Pytheas’s travels are plausible; there is substantial
documentary evidence in secondary sources suggesting Pytheas’s written account
of his travels was widely known in the ancient world, and some of those ancient
historians had axes to grind. Academic jealousies abound, no matter what the time or place!

One can only go so far with this sort of evidence, so Cunliffe spends a lot of time discussing trade relationships, the people Pytheas would have likely met, and the historiography of ancient ethnography. A little book with big imagination. It's a good time to study the ancient world; scholars have reached a tipping point in which literary sources, archeological evidence, linguistic theory, comparative mythology, and genetic discoveries are beginning to reinforce each other, and we're learning that the ancient world was much more complex and sophisticated that we had anticipated.

This is one of
my favorites. Great fun and very
well-written! Howarth is a superb
story-teller, and a good historian to boot. You’ll finish it in a day. Riveting!

This is the
story of a single year in England, when Edward the Confessor dies, Harold comes
to the throne, and William takes it away. Plenty of educated guessing, but this is one convincing history based
upon primary sources, without too much clutter from secondary
interpretations. A real man’s
story of misunderstanding, betrayal, greed, battle, and fate. You won’t be able to put it down! The drama! The suspense! The tragedy! All it needs is a screenwriter and voilà! A twelve episode HBO
mini-series. I can’t wait!

And that’s that. Hope you like your reading assignment; by
the end of the semester I expect from each of you a twenty-pager tying them all
together! (I had one of those
once, in a class titled “The Novel as History”. History credits for English majors). But I do detect some themes; what they
mean I can’t say. Let the shrink
figure that out.