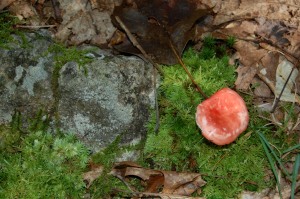 It was a ridiculously beautiful weekend. Clear, crisp days. The trees are on the verge of changing. This weather makes me want to cook apples and sausage, any kind of food that will work as a vehicle for garlic and rosemary, and banana bread. A perfect day for banana bread.

On Saturday, we took a hike up to Doodletown. Doodletown is a ghost town in the middle of Harriman State Park. It has an old history; the British troops marched through. But in the 50s, as the park expanded, the old homes were either bought out or taken with eminent domain. 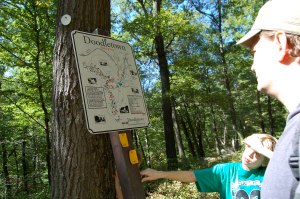 It's a good hike. It takes a couple of hours with little kids, but it's very do-able. You can see spooky remains of house foundations and front steps that lead to nowhere. There are also a ton of rocky streams, which my kids love to hop around.

On the way back, I passed a three foot snake. It was sunning itself on the path about two feet away from me. As it slithered into the undergrowth, Steve came running over to check it out. It was big and fat with a triangular head. And as its tail unfurled, you see the rattle. It was a timber rattlesnake, which is endangered.

I tried to get a good picture of it after it curled up under a shrub by the side of the path, but when I got closer, it raised its head and bobbled its neck like a Brooklyn girl. Decided to back off, so this lame picture was all I got. 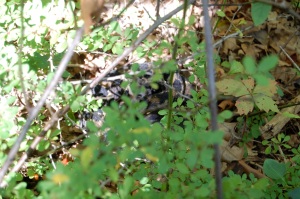 As we walked home, we retold the story over and over. By the time we got to the car, salt and pepper had been added to the story. "Mom almost got bitten, and we were going to have to get a helicopter to airlift her to a hospital. She almost died!"

The rest of the weekend was spent outside. I bought mums for the planters on the front porch and cider donuts from the local farm. On Sunday, I hooked up my pathetic laptop with a series extension cords and started a draft of a new project on the porch. (God, I hate Apple power cords for iBooks. I need a new one, but I'm not paying a $100 for it. So, I'm using duct tape.) My kids spent lots of time with their cousins. I'm finally back on track for work, so I don't have that vague feeling of panic. 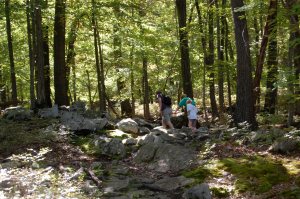 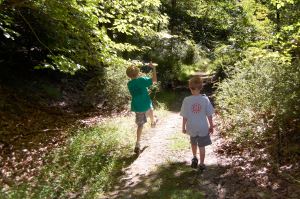 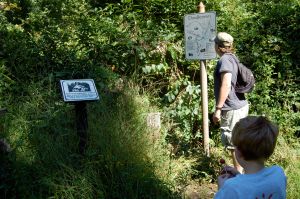 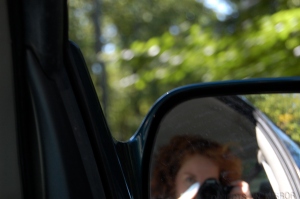 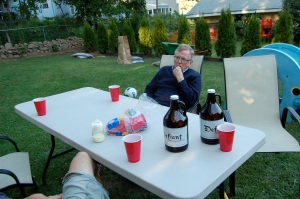